We often hear things like: “Oh New Zealand needs to have a national conversation on topic xyz”. There are many ways a national conversation can happen. For example, through traditional media, through blogs, tweets, Facebook comments, and other social media. But there are some big issues with most of the methods we use today. Outlets often only present a narrow view of the issue, and we tend to flock to the outlets which support our existing views. This creates what we commonly know as a filter bubble or an echo chamber - places where we all nod wisely and agree with each other.

On the other hand, I’ve seen (and participated in) Facebook conversations where opponents butt heads and the only thing in mind is the elusive victory of proving the other wrong, and the idea that they might eventually yield to reason, see the error of their ways and admit that they were wrong. Yeah right! Worse, when people lack the discipline to hold their fingers back from the keyboard these conversations often devolve into mudslinging matches.

But I’ve also seen Facebook conversations where people genuinely work to find common ground and consensus. These are good but in somes senses the saddest ones because they represent wasted potential. While it’s possible others will stumble across these conversations and be influenced or informed by them, more likely than not, they will be pushed to the bottom of the heap because they don’t meet Facebook’s criteria for profit. So even though people have put in all that mahi to see the other’s point of view and find some common ground, it’s unlikely to contribute significantly to a national conversation.

All of this adds up to unbalanced conversations with ourselves, deeper polarisation, wasted potential and ultimately low-quality national conversations.

In contrast to all that - I present the OneAction participation model, or at least an early idea of what it might look like. 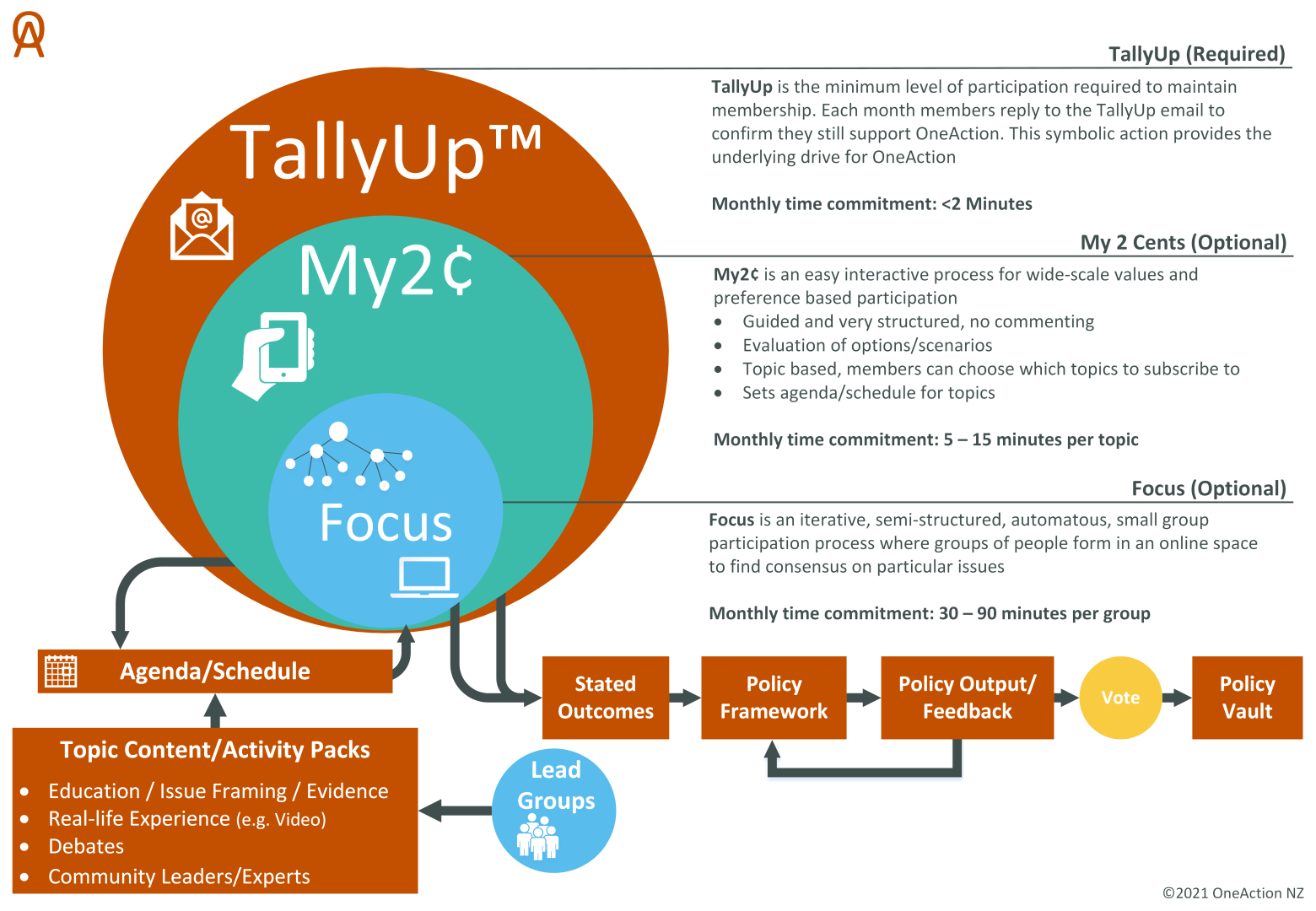 There are three main tiers of participation: The first tier is TallyUp – at the end of each month an email stating the total number of members is sent out to all co-op members. Members who want to retain their membership and want to continue to supporting OneAction’s vision simply need to reply to the email. As long as they reply within that month, they will be counted in the next TallyUp and so on. If they don’t reply their membership will lapse until they re-join. The purpose of this tier is to allow people to support the idea even if they don’t necessarily want (or have the time) to be involved any further than that. It’s just a way to say, yes, I support people-up politics in Aotearoa. You might wonder – what does replying to an email once a month actually achieve? You can think of it as a micro donation of your willpower - political fuel. It’s a symbolic gesture and a display of people power. It let’s the volunteers in the OneAction engine room know they are supported. Traditional political parties only know their true support level once every three years when the election results come in. OneAction counts our numbers every month. TallyUp is the minimum level of participation required to be a member.

The second tier: My2¢, is an online process whereby members express their views and values on various topics. This is a structured process that is meant to operate at a wide scale, so it doesn’t involve free text comments. The way it works is that members are taken through a short journey that outlines the various aspects and viewpoints of the issue. It tells them where to find more information or go deeper into the topic if they want to. They are then asked for their input through methods like Likert scales (e.g. strongly disagree, disagree, not sure, agree, strongly agree etc.), multiple choice questions and other innovative scoring methods. The data created in this process builds a model of the co-op’s shared values and aspirations, and even what we’d be prepared to sacrifice. This data informs the next stages and allows us to cut right to the chase when developing policy. It removes the need for careful tailoring of policy to achieve maximum votes, something which occurs in traditional political parties who are required to view everything through a lens of political risk.

The third tier: Focus, places participants into autonomous groups which work to build consensus on a topic or issue. At their disposal they have a content pack which outlines the issue and the evidence around it. They also have access to the data from the My2¢ process. The group operates on a set timeline (e.g., over a 6-month period) and follows a set structure to produce an output in the form of an ‘outcome statement’. The process includes discussions and activities using forums, and or video chat, and other online tools. Safety mechanisms are built into the process so the group can be dissolved, mediated, or expanded. Many groups operate in parallel and may be presented to by experts, community groups or people with on-the-ground experience, to help inform their deliberation.

It’s important to note that the above processes are all about determining the co-op’s values, what outcomes they want and the direction they want Aotearoa to head. It’s about where we’re going, as opposed to how we get there. The ‘how we get there’ part is where the policy framework comes in.

The outputs from the My2¢ and Focus processes are fed into the policy framework where an expert team works to produce an evidence-based policy. The policy articulates the intended outcomes, measures, risks, etc. The policy then goes through a feedback process to refine it, where the aim is to reach a high level of acceptance. Finally, the co-op votes to accept or reject the policy (or perhaps send it back for re-work). A super-majority of 75% is required to pass the policy.

The content and structure for the topics explored in My2¢ and Focus are built on content packs which provide balanced information on the different aspects of the issue/topic. This could include educational material such as real-life experience interviews, expert input, online debates, readings, summary of the key arguments and analysis of value intersections. These content packs are developed using a specific structure that is designed to work inside the OneAction participation platform. Content packs must fully cover the arguments. That is, developing content packs requires collaboration between people with different views to ensure balance.

This new kind of co-operative democracy could be ours if we choose to build it. If you want to see it happen, click here join the TallyUp and show your support.